California’s worst fires in State history (based on acreage burned) occurred in 2008, 2017 and 2018, scorching more than 4 million acres collectively. The devastation is larger than the state of Connecticut.  According to CalFire Reports:

Aside from damage to the lands, the fires wreaked havoc on the atmosphere by releasing millions of metric tons (MMt) of carbon dioxide (CO2).  According to the California Air Resources Board (CARB), the emissions from the fires only caused the release of:

At present, more than 1.6 million acres have burned as a result of California wildfires.  The LNU Lightning Complex Fire and the SCU Lightning Complex Fire are already classified as the second and third largest in State history – each have burned more than 370,000 acres as of mid-day August 28.  With the peak of the fire season still to come, it is likely California will blow by the CO2 emissions as a result of fires.

If California sought to offset those emissions, how would we do it?  What would you need to shut off and for how long?  Using CARB’s data from 2017 (which is the latest data publically available), in 2017, California’s total emissions from all sectors were 424.1 MMt CO2e (CO2e—Carbon and Carbon Equivalents) – this is how much carbon it took to move the fifth largest economy in the world.

By sector, the emissions breakdown is as follows: 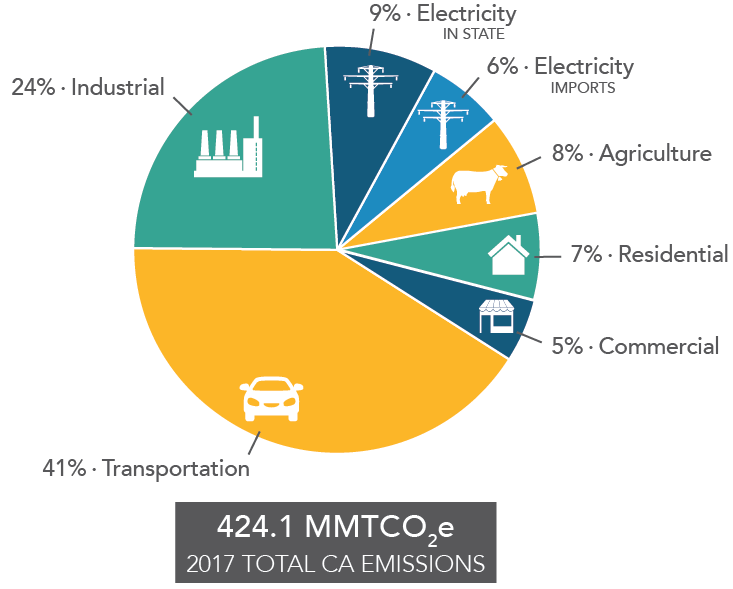 Of the above, which would Californian’s be willing to give up in order to offset the top three most destructive fires in California history to date (not counting 2020, which has not yet concluded)?

Are California policies really creating the intended benefits we sought to achieve, or is there a better approach?  Legislators, regulators, environmentalists and business leaders will undoubtedly debate this very question for years to come.

COVID-19 Crossroads – Energy to the Rescue