LEDs Make Lighting Up the Holidays a Little Less Costly

The 2020 COVID-19 pandemic impacted all aspects of our lives, from work, to school, to travel, to a presidential election, to – well, everything.  As the year that was and wasn’t winds down, and we enter the holiday period: Can anything save 2020?

In 1882, in a townhouse at 136 East 36th Street in New York City, Edward Hibberd Johnson had an idea that would make him an unsung or perhaps forgotten holiday hero.  Johnson owned a company called the Automatic Telegraph Company. While the company itself did not leave a lasting historical impression, Johnson’s vision did.  You see, he hired and nurtured an aspiring inventor. Johnson so trusted this then 24-year-old marvel that Johnson invested much of his wealth in advancing the inventions of this prodigy named Thomas Alva Edison.

When Edison patented the light bulb, its exact value was hard to gauge; widespread electrification was still decades away. Still, Johnson, Edison and others invested $35,000 to form the Edison Lamp Company to sell the bulbs.

Before long, Johnson had a bright idea. It was December 1883, and he set up a tree by the street-side window of his home. Johnson hand-wired 80 red, white and blue light bulbs and strung them together around it, and placed the trunk on a revolving pedestal, all powered by a generator. Then he called a reporter. The lights drew a crowd as passers-by stopped to peer at the glowing marvel. Johnson turned his stunt into a tradition; he also pioneered the practice of doing more each year: An 1884 New York Times article counted 120 bulbs on his dazzling tree.

Johnson’s lights were indeed ahead of their time—electricity was not yet routinely available—and they weren’t cheap. A string of 16 vaguely flame-shaped bulbs sitting in brass sockets the size of shot glasses sold for a pricey $12 (about $350 in today’s dollars). Then, in 1894 President Grover Cleveland put electric lights on the White House tree, and by 1914, a 16-foot string cost just $1.75. Today, the happy lightbulbs lighting the holiday spirit are everywhere, and nowhere near the exorbitant original costs.

Holiday Lights and their Costs Today

The U.S. uses more electricity during the month of December than some countries do in an entire year. In fact, the Rockefeller Center Tree in New York City uses five miles of lights and uses 20,000+ watts of electricity. Fortunately, we’ve come a long way from Edward Johnson’s first illuminated Christmas tree, and this tree is lit by LED lights and powered by solar panels and batteries. But if you light up your home for the holidays, how much more will you spend on electricity to light it?

Well, that depends on which of the two most popular types of lights you plug in. Strings of incandescent bulbs use about six times the wattage of LED–which translates to about six times the cost to power them. LED lights are your most energy-efficient option.

The trade-off? Well, the LED lights are expensive—a string of 100 LEDs is about $20, versus a string of 100 incandescent lights at $3. The catch? LED bulbs use far less energy than the incandescent brethren. Further, incandescent bulbs have an average effective life of 1,000-1,200 hours. LED lights producing approximately the same amount of light can provide up to 25,000 hours of illumination.

We’ll keep it simple. Let’s say an average incandescent string of 1,000 mini lights is approximately 408 watts, while a similar strand with LED bulbs is 69 watts.

Multiply the total wattage by 0.001 to find the total kilowatt-hours of electricity that will be used. In our example, incandescent bulbs will utilize 4.08 while LED bulbs will be 0.69.

Determine how many hours per day the lights will be on. We’ll use the average of five hours giving us 20.4 kilowatt-hours per day for incandescent bulbs and 3.45 for LEDs.

Multiply by the number of days your display will be active. If we estimate 30 days, we’ve got 612 kilowatt-hours per season for incandescent bulbs and only 103.5 for LEDs.

Bottom line: If the lights bring the spirit of the season home—especially during the pandemic—splurge. 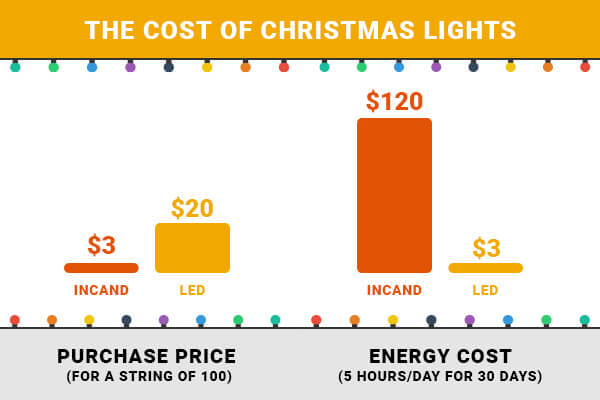 One more thing… COVID-19 has really bummed us out on many fronts, and particularly when it comes to in-person shopping during this season.  There is a little magic that strikes us, maybe the memories of being a kid—maybe other memories—of being hopeful that Santa would get it “right” this year and bring us what we wanted.  Thankfully, Santa’s number one helper is ready to go. Our on-line shopping is fueled by energy. As we click-through and pick things to order, and things to schedule for delivery, we need to be thankful that there’s a fossil fuel employee somewhere in our country delivering fuel that every delivery truck, and airplane will need to allow Santa to deliver all those things we ordered. Maybe for us, maybe for a friend or a loved one, or a stranger. Year after year, notwithstanding the weather, fossil fuels continue to be Santa’s number one helper.

COVID-19 Crossroads – Energy to the Rescue