The True Cost of an Electric Vehicle

The Bottom Line on Electric Vehicles: They’re Cheaper To Own, Electric Cars Are Cheaper To Drive Than Gas-Powered Cars, and Here’s Why the Next Car You Buy Will Be Electric are just three examples of Internet clickbait promoting electric vehicles by hyping the monetary savings associated with driving an electric vehicle.

On the surface, that appears to be true.  According to the US Office of Energy Efficiency and Renewable Energy, the average cost for a gallon of gas is $3.35 compared to $1.74 for an electric eGallon. However, there are several factors in determining if an electric vehicle is cheaper.

First is the actual price of the vehicle. While Teslas, Chevy Bolts, Nissan Leafs, Audi etrons, and Smart Cars are the most popular electric vehicles, it is hard to compare pricing to traditional gas vehicles. Several car manufacturers make gas vehicles and a hybrid vehicle or electric vehicle alternative. In looking at these vehicles, the electric car is considerably more than the comparable gas vehicle. 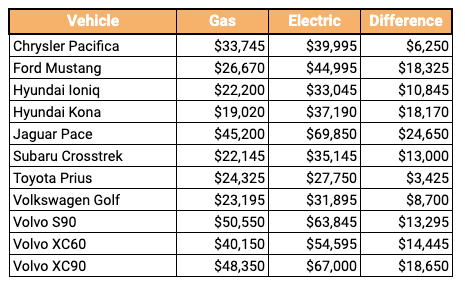 While the federal tax credit helps to offset the cost for some vehicles, it does not cover the entire difference between electric and gas vehicles.  Also, the federal tax credit is going away at the end of the year and is currently only $3,750. In fact, some models, such as Teslas, no longer offer tax credits due to the number of vehicles in the market.  California also provides a rebate of up to $2,000. However, the tax credits and rebates do not make up for the additional costs of the vehicle.

Then there is the fueling of the vehicles or the charging of the car as the case may be.  While the cost to charge is less than it is to fill up at the gas station, the ability to charge is still limited. While it seems that there is a gas station just around every corner, there are only 18,000 charging stations in California.  Governor Jerry Brown’s executive order calls for ten times that amount with 250,000 charging stations by 2025. The cost for that infrastructure will be in the hundreds of millions of dollars that will be passed back to the consumer in higher prices or to all Californians in higher taxes.

Electric vehicle owners also have the opportunity to charge their vehicles at home.  Most electric cars come with a level one charger that plugs into your socket. The drawback is that it delivers between 3.5 to 6.5 miles per hour of charging, according to the California Electric Vehicle Infrastructure Project (CALeVIP).  For drivers that commute to and from work, this charge may not be enough to meet their daily demands.

Many electric vehicle owners opt for a level 2 charger that delivers between 14 and 35 miles per hour of charging to save time.  According to Southern California Edison, level 2 chargers range in cost from $379 to $1,900. However, that is not the only cost.  There is also the installation where it is highly recommended that a trained electrician install the charger and update the wiring in the home.  The U.S. Department of Energy estimates that installation costs range from $600 to $12,000.

Now, if you believe that you will save that money in reduced costs to charge the vehicle, there is one last cost – time.  Californians love to drive, not just to work but along the coastline, to the mountains or Disneyland. Should you need to charge your vehicle at a charging station, expect 30 minutes to 2 hours to fully charge your vehicle compared to the mere minutes to fill up at a gas station.  While electric car drivers are adjusting their habits to deal with delays in charging, it is tough to keep some passengers calm when they cannot wait to see Mickey Mouse.

While technology is improving and electric cars are the future, we also need to be honest about the economic and time costs associated with electric vehicles.

Power Vampires in Your Home

What can you do to lower your power cost at home?

California proposes an all-electric car future, but where will the electricity come from?